Blog Banter # 52 - Just another day as an astronaut

"For the past four and a half years, the graph has hovered around that 30,000 mark; it is, for all intents and purposes, a plateau. But everything must come to an end sooner or later and that is what this blog banter is about.
What's on the other side of that plateau?
Is there any path for CCP to follow to raise those numbers upwards for a sustained period, or is EVE going to enter a decline to lower logged in numbers from this point? How soon will we see an end to this plateau? Months? Years? Or will you argue that 'never' is a possibility? Or you can look at the root causes of the plateau and tackle the question if it could have been avoided or shortened if CCP had taken different actions in the past.
Also, what would EVE be like with an order of magnitude fewer or more players?"

This is a continuation of a topic from Blog Banter #50, at least the way i look at things.
Jester's Trek tries to spin it as from "Retribution" but that's hogwash since it was Apocrypha that broke the 30k mark, and without it I daresay we would have never breached that limit.

What stuff was in that expansion?
That's a lot of powerful stuff for CEOs to offer as interesting things to branch into for our recruits, and gave us powerful tools to help the n00bs (aka new customers)
oh wait...
we're supposed to welcome them with duel popups, trolling in local, can baiting, aggro traps, scams, awoxing, and the like because we all know the victims actually enjoy the surprise buttsex, amirite?

There was a MMOG i played, called JumpGate, that did have an order of magnitude lesser than EVE, that also had too many killers being listened to by ego stroking developers. Yeah, that game died...really never took off...stagnated until they turned the servers off.
Got pretty lonely out there as the influx of players couldn't keep up with the brain drain of carebears as griefers harvested ever more tears for their addiction...yet who were the loudest most obnoxious squeaky wheel? That's right, the griefers.

oh wait...
we're supposed to call them "The core of any MMOG" *cough*bullshit*cough*

What if we were a magnitude greater in population? the new WoW? mining in missions would be commonplace, that much i can guarantee you among the barren belts before DT.  Ice anomalies would be stripped bare in minutes. Smartbombing battleships would be all the rage for suicide gankers, and greed fit retrievers would keep the catalyst builders swimming in isk. n00b CEOs falling prey to hordes of awoxers would make the story of Ubiqua Seraph like some cute grandpa tale of woe, and noone would remember m0o corp except us oldtimers.


*shrug*
On the other hand, in support of the 'plateau is fine' camp, there's the argument - which has merit - that says the fantasy genre has more sway among the fickle populous on the internet than the subculture of sci-fi.


Whatever happened to E&B? I was playing JumpGate while that game floundered and died.

The root cause of the plateau are obvious: Apocrypha promised more of something better, socially, not just playing tiddlywinks with ship rebalancing for the bread and circus pvp crowd who think "social networking" is getting peer acknowledgment from kicking sand in someone's face.

It's been 10 years of beta-level programming for the social fabric (aka player corporations) that has huge loopholes for lazy lowest common denominator griefers to fly a gnosis through. Do you think we don't all notice the elephant in the room? How fancy are the emperor's new clothes?

What if this new phase of CCP Seagull's vision of promises to allow sharing of personal hangars with corp members heralds a revamp of the roles and access that have plagued the social fabric of this game?

edit: saw this video via the "this week in eve #28" links that had this image: 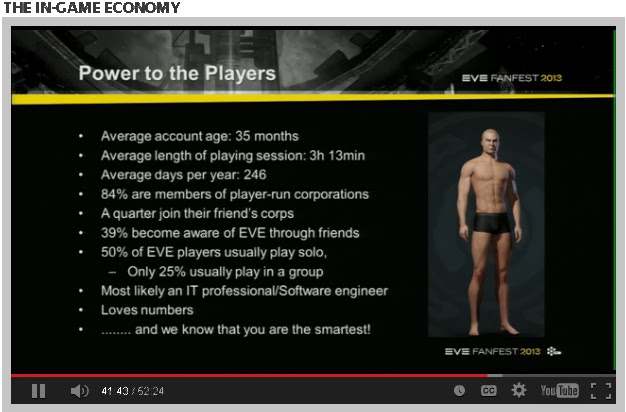 Posted by MinorFreak at 3:54 AM