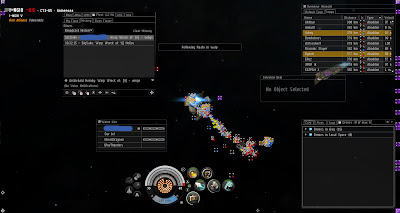 Well, it was a good thing i lost my logistics ship couple days ago, because this morning i woke up on the sofa with the FC yelling for people to get into fleet. They'd just undocked Geddons&Guardians and warped to outgate when i fully woke up and relearned how to switch out my drone augmentor for a cyno (sans ozone) and remember how to undock. Personally, i'd have rather taken a shower at that point. Anyways, off i went and caught up to the main group as the FC was yapping about 200 people about to fight in our target system over a station (russians and -A- pets.) Since we were only 66 in fleet i figured we're gonna diieeee like last time, even though we had 2 triage carriers on standby. By the time we got their our ingate was clear and a huge fight was brewing on another stargate with subcaps. Our FC got us on the tail of an enemy blob and that's where we got most of our kills - apparently our logistics team bit the big one right away but me and my fellow armageddons were ignored for (apparently) bait low-sig-radius Tengus of our allies who had sniper tornados at range on the enemy being lured about. Once our guardians popped (no broadcasts from them nor comm chatter) our FC called for a cyno but the one triage carrier ordered in was primaried. Apparently, this new target lured the enemy away from close range to the Tengu group and allowed them to survive a bit longer. Soon after the carrier popped we were forced off the field because the enemy started getting logistics help and we lacked the numbers by then to overcome this.

So the picture above is when we whored onto -A- kills they were getting from putting a bubble up at the soon to be ex-russian station...We warped soon after to the wreck broadcasted and i think i got on a few more KMs. Then it was warp off time again for us until we warped back to undock to whore again on some carriers (i think i got a single shot off on one or two at most before they popped)...By that time -A- had cyno'd in their supercapital fleet and the station melted.

So there was nothing we could add so got warped off to outgate where i proceeded to ignore orders and madly looted. i only got faction ammo though because the good stuff had been swiped by more nimble craft.

Engagement on alliance killboard
Posted by MinorFreak at 10:02 AM